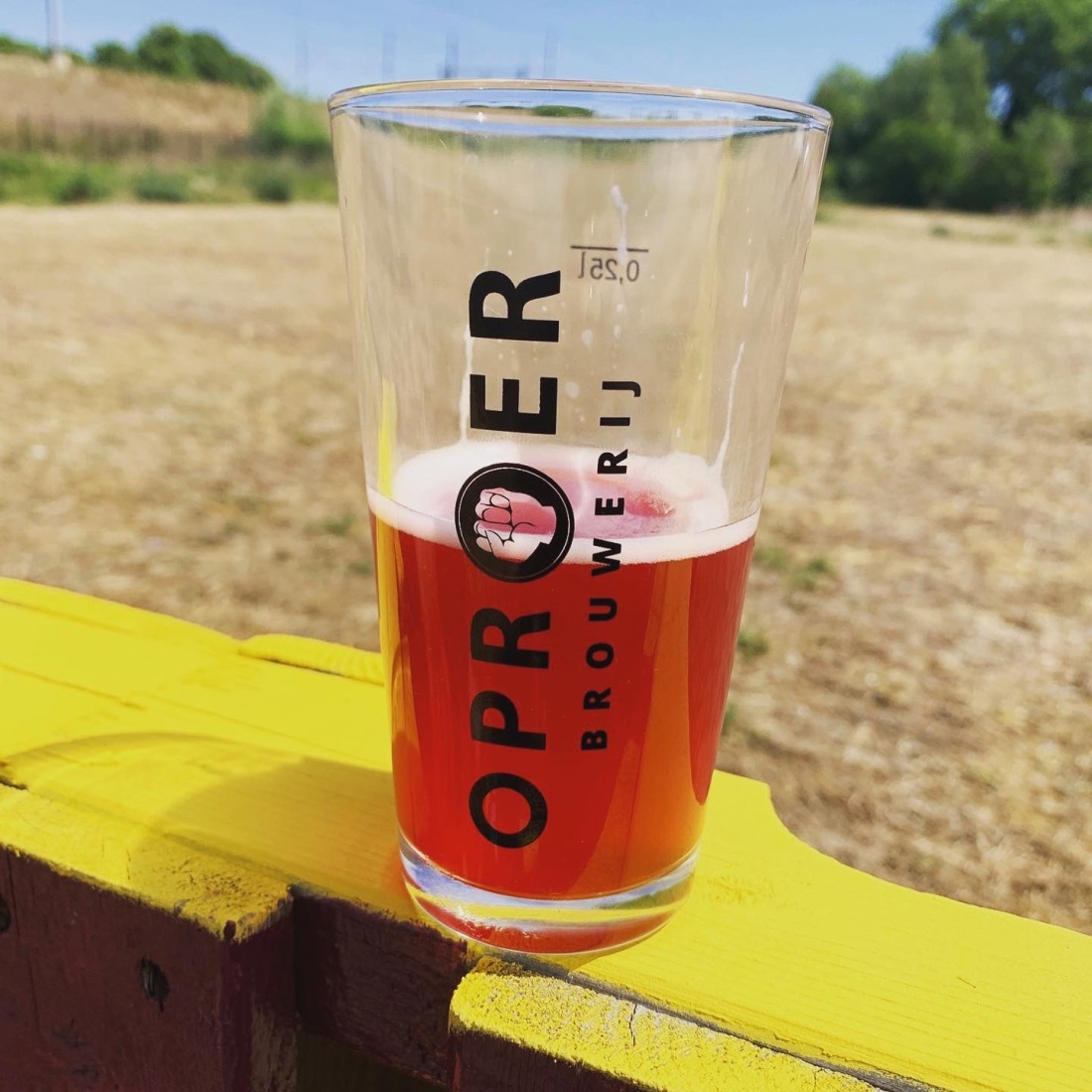 For several years the CAB building next to the Zuilen trainstation in Utrecht was a destination for (vegan) beer lovers. It was here that Oproer had their brewpub and vegan restaurant, doubling as a brewery in the first two years. A quick history lesson for those who don’t know: Oproer started as the combination of breweries Rooie Dop and Ruig. Since this fusion it has steadily been building a name for itself. The vegan restaurant won an award for best vegan restaurant in the country. When they started sending in beers to competitions, the beers also started winning prizes. Since a few years they started a sour program as well with great success. A kriek winning awards twice in a row at the Dutch Beer Challenge for example. But their Session IPA and Double Oatmeal Stout won as well, showing the wide range of what they can make.

Things were going fine until the disasters.

First that one disaster that affected all of us. Oproer, like all bars and restaurants, had to close its doors after corona hit. They frantically set up a webshop to try and sell at least some bottles. And with great success, sales were better than expected. Over the summer the bar could open again. But with the regulations they could never be at full capacity.

Then the number of covid cases rose rapidly and they had to close. Again. And this time this also meant letting go of the entire staff.

And then another disaster hit.

On a Monday night in January a fire broke out in a wooden floor storage at the other side of the building. The fire was huge and the smoke went under the roof and ended up in the Oproer brewpub. Though nothing was burned or broken the smoke damage was so extensive that everything was useless, covered under a layer of poisonous soot. It was clear that it would be a very long time before anything could start here again.

But having their own place to serve these beers to the public is what they wanted the most. So the search commenced to find a new place. And they found one on the ground floor of a completely new structure in Utrecht Overvecht.

The new space is going to be vast, twice the size of the old pub and that was already roomy. Beer is supposed to flow out of 20 taps. Above them are hundreds of apartments are planned. Downtown Utrecht is only about 10/15 minutes away. The Overvecht Trainstation is also relatively close.

They have been socially and environmentally conscious from the start. This will come back in the beercafé. Most of the construction materials inside will be from recycled materials. And because the room has several areas different designers can make something.

It has to be more of a beercafé than the old place ever was. A big bar in the middle of the room and a lot of sitting and standing places to enjoy a cool Refuse/Resist or sour Kriek. Different sections will have different looks, as to not make it too much of a colossal space but with things to explore.

It is a completely new and bare structure. Even the electricity cables and watermains have to be installed. Because they don’t have a few hundred thousand euros lying around and insurance only covers a small part after the fire, they opted to try the often used method of crowdfunding. On October 6th the reached the goal of € 300.000 for the new bar. They are now looking for an additional € 75.000 to improve and expand the brewery. So if you want to help out with the Oproer resurrection go to their page at CrowdAboutNow.

The plan now is that they will get the key to the new place in October. With any luck the bar can open around February 2022.

Oproer needs to continue being the presence that they were in the Utrecht beer scene, and the new beercafé is just that. I myself can’t wait to see what it will be like in 2022.

In 2020 worldnews was dominated by corona and its effects on society. The beer world was hit hard with bars and brewpubs closing in large parts of the world for a long time.

But there is a darker cloud that hangs over everything: our rapidly warming earth. A lot of things that we humans do are destroying the earth: gas powered cars, flying all over when a train will do, eating too much meat, cutting down forests… I can go on for a while. If the rest of the world would live like we do here in the West, we would need three earths worth of resources.

The beer world is trying to do their part by becoming more sustainable. Solar energy on the brewery, energy sufficient equipment, better produced ingredients and distribution with electric trucks are just a few examples. The grain left over after mashing often goes to animals who will eat the still very nutritious stuff. Sometimes bakers bake bread with the grain. Anything better then throwing it away in the trash.

In the Netherlands some breweries have started interesting projects to become more sustainable. Projects that deserve more attention. Attention I want to give them in a series about people in the Dutch beer world trying to do their part. In episode 1: Pieke Brood Bier. I spoke to founder Laura Nieboer about this interesting concept.

Pieke Brood Bier (Pieke Bread Beer) is part of the start-up Innowastion, a company trying to ‘give waste value’. Innowastion was started by Laura Nieboer after graduating from Maastricht University. Maastricht is where they are also based. It is now a three woman team with the addition of Karlijn and Joanna.

So how do they do fight waste with beer? Laura:

“It all started early 2018 when I realized how much bread we throw away in the Netherlands. We throw away around 12 whole loaves of bread per person per year. Knowing that so many people worldwide struggle to get (good) food I felt shocked by this statistic. As bread has a short shelf life due to its high water content, there are not many things you can do with bread. I wanted to show people the potential of food ‘waste’ beyond the obvious, such as making croutons or breadcrumbs out of it. Somehow, I made the connection between bread and beer, which was the start of the Pieke Broodbier adventure.“

“A friend and the internet taught me how to brew beer at home. After testing many batches, we finally had a nice beer. Taking a bit of a risk I decided it was time to brew it commercially at a local brewery here in Maastricht. We started with a batch of 300 litres, but soon due to its almost immediate success, we scaled up to 600 litres and later to the 1000 litres batches that we currently run.“

2020 saw the release of two batches of 1000 liter. They plan to brew at least that much in 2021 with maybe one batch more. If the bars can open again soon there is more chance of this.

Whenever they brew, at nearby Fontein brewery, they collect bread that would otherwise have been thrown away. Because of the many types of bread that they pick up every batch of Pieke Brood bier is slightly different every time. But this is something they know is part of the experience and adds a little extra. The beer as it is currently can best be described as a blonde beer or a golden ale.

Where to get it

For now Pieke Broodbier is for sale in some local (Maastricht) shops, bars and restaurants. They also supply three local markets every week. These markets are a good way to have direct contact with fans and customers: “An observation I can share from interacting with people at markets is that especially older males think our beer is not dark enough for their taste haha. They generally ask us why we brew an ale and not something stronger. Overall, the reactions we get are positive especially if people realise the positive impact they are making by buying and drinking Pieke Broodbier. “

Development continues on new beers and drinks. They are this year working on a new types of beers, often in collaboration with other parties. So who knows , this year we might see a new Piekebrood beer.

But Innowastion won’t focus on beer alone. The plan is to introduce new drinks made with waste this year. This has led to a name change. It is now Pieke Drinks, Pieke Broodbier will remain the name of the beer. So keep checking their social media channels for more.

She is not far enough yet to have Innowastion be a fulltime job. When it was founded she was still working on her masters, which she got at the end of 2020. Innowastion has not attracted investors or government help yet. They did win a Maastricht Student Entrepreneur Award in 2018 and got help from a business coach to set things up. But for now it is all own money. The profit from the first batch financed the second and so Pieke Brood Bier can be made.

The dream is that in the coming years Innowastion can be full-time activity. But as with many startups, the finance will have to come first.

So whenever you are in Maastricht seek out this wonderful initiative. We all need to do our part to combat the climate crisis, and why not enjoy a beer in the process?

Welcome to Hop Culture Reference. Risen from the ashes of what once was the Dutch Beer Pages. Back again to bring you news and insight into the wonderful world of beer in the Netherlands.

Sick little guy at home so no beer for me this week but I do have some time for reading this classic. Interesting to read from 1993 about many breweries that have since folded. Doubt you can fit all current Belgian beers in one book now.
After flushing a peanut butter strawberry sour only a classic @pilsner.urquell will suffice.
Most Dutch breweries make American IPA’s. It is refreshing to see a Dutch brewery attempt an English IPA. Like @brouwerijoudaen here, more malt than hops based.
Hopefully this summery tasting beer from @vaultcitybrewing will make me feel a little bit warmer.
Hmm malty, prizewinning, goodness from one of my favorite breweries @fortbrouwerijduits. A very nice Vienna Lager
Excellent day yesterday doing a tour with @utrechtcraftbeertours / @buismanbeertours in beautiful weather. Today is rainy, perfect for a @wanderbeyondbrewing Ursa Imperial Campfire Porter.