It is one of the things to most look forward to on the beer calendar: festivals. And in the last two years that calendar has been eerily empty. The only festivals that were held were of the sit-down kind where you order at your table and they bring it to you. Not exactly how they were meant to be.

August and September is supposed to be the month of Van Mollfest, Brewda and Borefts but they were all, logically so, cancelled. The only ‘real’ festival that was still on, was the Leeuwarden Beerfestival.  This  festival had gone through the same phases as most with it being postponed a number of times. The last scheduled date was on September 25 and that luckily turned out to be the day that many of the corona rules were relaxed or completely given up. Gone is the 1,5 meter distance between each other for example. But you can only get into a bar or restaurant with a QR code. This code has let to a lot of resistance with bar and restaurant owners, but for this festival it worked fine.

My first beer festival in two years however was not as a visitor, but as part of the Oproer team that was invited to pour that day. It had been a while since I had done something like this but it was a good to do something again where corona was not the first thing on your mind.

The festival was held at De Eenhoorn, an entertainment venue that is big enough to hold all the brewers and the over 800 people attending, without ever feeling too crowded. There were three seperate rooms for the brewers. The attending breweries were a mix of good local and national brewers like De Moersleutel, Grutte Pier, De Natte Gijt and Duits & Lauret, with some international ones like Lupulus, Dochter van de Korenaar and Lagunitas. At the same time two tap takeover were held at the adjacent café De Markies by De Ranke and Wild Beer. This also meant a nice variety of different beer styles. De Markies was also the organizer and subject of an earlier piece I wrote about Leeuwarden. Besides being a great café they show to be able to organize a great festival as well.

As a ‘brewer’ you usually don’t have a lot of time to walk around the other stands and talk and sample their beers. Especially not at this festival, it was busy all the time. I feel bad for the brewers who were there alone. But a busy festival means a successful one!

I for one was happy to be back into the action without any hassle and rules to strictly adhere too. I would not mind returning next year as a guest and sample all the fine beers on offer.

With all the complaining by some that all our freedoms are being taken away it was good to be at a festival that for the most part was back to normal. It’s good to be back, and thanks De Markies en Leeuwarden for making that possible. 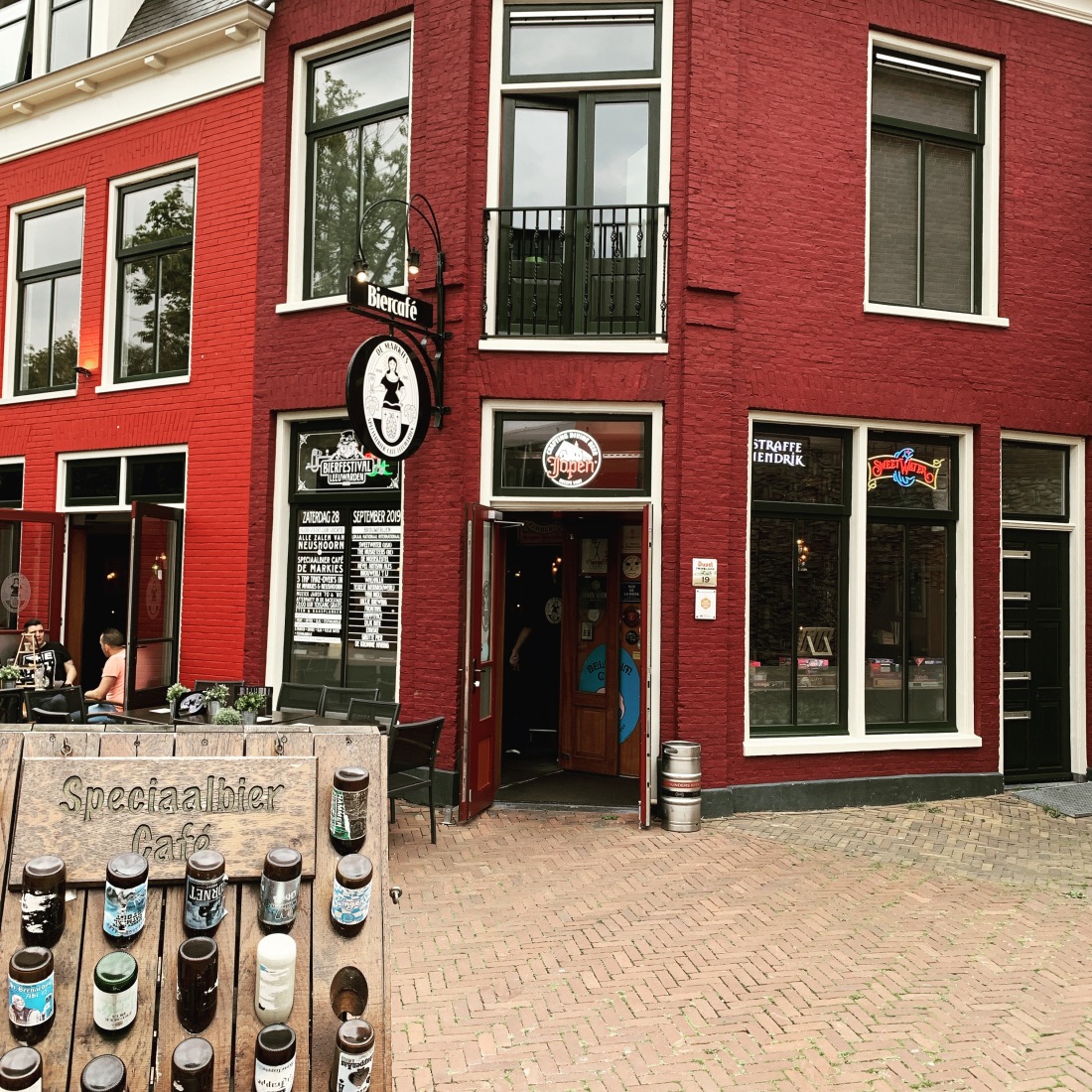 Friesland, a province in the north of the Netherlands next to Groningen. A province with a proud history, culture and even their own official language. A province known mostly for dairy products and speedskaters.

Their most famous alcoholic beverage is a drink called Beerenburg, a type of spiced jenever/gin that has been around since the mid 1800’s.

Beer? Not so much. There are a handful of breweries in the province and a couple of above average beer café’s but it won’t attract any outside tourists who come for just the beer culture. Simply because there really isn’t one yet. Nearby city Groningen has done a lot better with it’s high number of breweries and bars. But this is also a bigger city with a large student population.

The most known Frisian brewery these days is Grutte Pier, named after a folk hero. Even though they do not have their own brewing installation they were one of the first local breweries and ran into some luck when they immediately won an award for their tripel beer. You can find this, and often another one too, on many a menu in Leeuwarden. The very old brewery Us Heit, once featured in Michael Jackson’s Beer Hunter show on television, is still around though but not very visible. We did visit Het Brouwdok in Harlingen, but more about that in a later post.

But that doesn’t mean it is a barren wasteland not worth a visit at all. The capital Leeuwarden has a few places though that merit taking the train over for a day. It is not the biggest city in the country and all the places I am describing here are all within the limits of the old city.

Let’s start with buying beer in a shop while it is still early. Jelle’s has a brilliant collection of beer from both Friesland to all over the world. So bring a suitcase for all the wonderful stuff that you will have trouble finding anywhere else in the country. It is not a beer shop alone but has a beer selection bigger than most smaller beer stores.

If you want to have a choice out of all the wonderful but standard Belgian beers walk over to the Dikke Van Dale. This café is worth a visit for the atmosphere alone. Huge high ceilings and ‘fake’ books on the walls. The Van Dale is the Dutch dictionary, hence the books. If you like to rummage through an entire book of (mostly) Belgian beers than this is definitely the place for you. The list is simply amazing, though it doesn’t feel like an actual beer café. It is more of a restaurant where you can have a very nice lunch or piece of cake.

We happened to wander into Café Spoek on our way back to the hotel and were surprised by the nice atmosphere. Lot of music memorabilia around and what appeared to be local clientele. Their beer list is more than interesting too. It seems they have opted for a just a few breweries but they then do have everything that brewery has produced. So a lot beers from for example De Scheldebrouwerij. Great to find their Oysterstout just after I wanted one after dinner. A day later Gerard from Het Brouwdok in Harlingen told us that he also liked coming here and I can see why. Maybe not the best beerhunting place but a nice bar to hang out for a few hours.

If you do like beer hunting then De Markies is the bar for you. Awesome selection, beautiful bar and very knowledgeable staff. This is always an extra in a bar. Lot of taps too with mostly interesting stuff from local breweries, Dutch breweries and international beers. The bottle selection is impressive as well. Some great sours, stouts and other fancy beer stuff. They do tastings for a group, including a interesting talk if you are interested in that. Best thing is that you can get a tasting board of 4 glasses from the taps. I have wanted to visit this place for a while now and I was not disappointed.

If you are visiting Holland and want to make a beer trip out of it then maybe Leeuwarden isn’t the right place to go compared to other cities. If you are here for a bit longer than you should definitely come over.

Welcome to Hop Culture Reference. Risen from the ashes of what once was the Dutch Beer Pages. Back again to bring you news and insight into the wonderful world of beer in the Netherlands.

Great way to spend a Sunday Afternoon with this pastry stout by @vaultcitybrewing and @nerdbrewing. More stout than pastry. Fortunately.
A wee heavy Scottish Ale from my friends at @terwijdebier tonight. Tasty and warming in a cold house. Should visit them soon, what do you think?
Is it ok to feel a little bit of pride seeing this sign for a walk I did for @utrechtcraftbeertours at @cafelijn4utrecht? Another walk that was great. Some more pride because of the saison by @oproerbrouwerij made for @goesting I had a small role in creating.
My local supermarket had this in the discountbin…
Hello darkness my good friend…. Three your old stout from @brouwerijoudaen. Perfect beer after a very interesting tour for some train people from NL, Germany and England. This beers drinks a bit too easy though…
Nice one from @brouwerij74 again. Should really interview these guys soon…